This is not the typical lease admin blog that I write because I do not have any Indian retail leases to review. For ICSC, I have taught in the US, Canada and China, and I have had students from countries around the world. Many of them have provided me with their standard lease forms so that I could learn about their lease requirements and incorporate that info into the ICSC classes.

As a true shopping center geek, I really do enjoy visiting centers when I am on vacation. So, I was excited to visit a couple of properties in Ahmedabad, India. The first one I visited was Alpha One (or Ahmedabad One) Mall about 2-3 miles outside of the main part of the city. No freeways in site with easy access for cars. Rather, this opened around 2009 in a very dense area. I don’t know the history of the site, but I have to imagine demolition of existing structures was involved. I was in a rickshaw getting there and, as easily as they manuever, it was still very difficult getting there just to the volume of people and cars and motorcycles and scooters and rickshaws and carts and trucks clogging the roadways immediately around the center.

Once there, you pass through security to get in to the center – metal detectors followed by a wand pass while standing on a raised platform. Women to the left (with modesty screening) and men to the right). My immediate impression was, yes it’s a mall. A mall that could have been in the US. But, what immediately hit me was the presence of so many doors. There were a handful of stores that had disappearing storefronts, but that vast majority had doors to enter the space. Air conditioning is a very precious commodity here in India, so I can only imagine they do not have the “tenant shall ensure that the air pressure of the premises will be balanced with that of the common area” type language. (When I mention AC being precious, my son is shadowing doctors over here, and AC is switched on for surgery, or just portions of surgeries, and restaurants add an AC charge).

The other thing that really caught my attention while walking through the mall was their use of kiddie carts. They looked similar to what we might find in the US, but without a handle for pushing. Rather, the parents have a radio control and steer the kids through the center! I believe that must have been the reason for posting guards at the top of escalators! 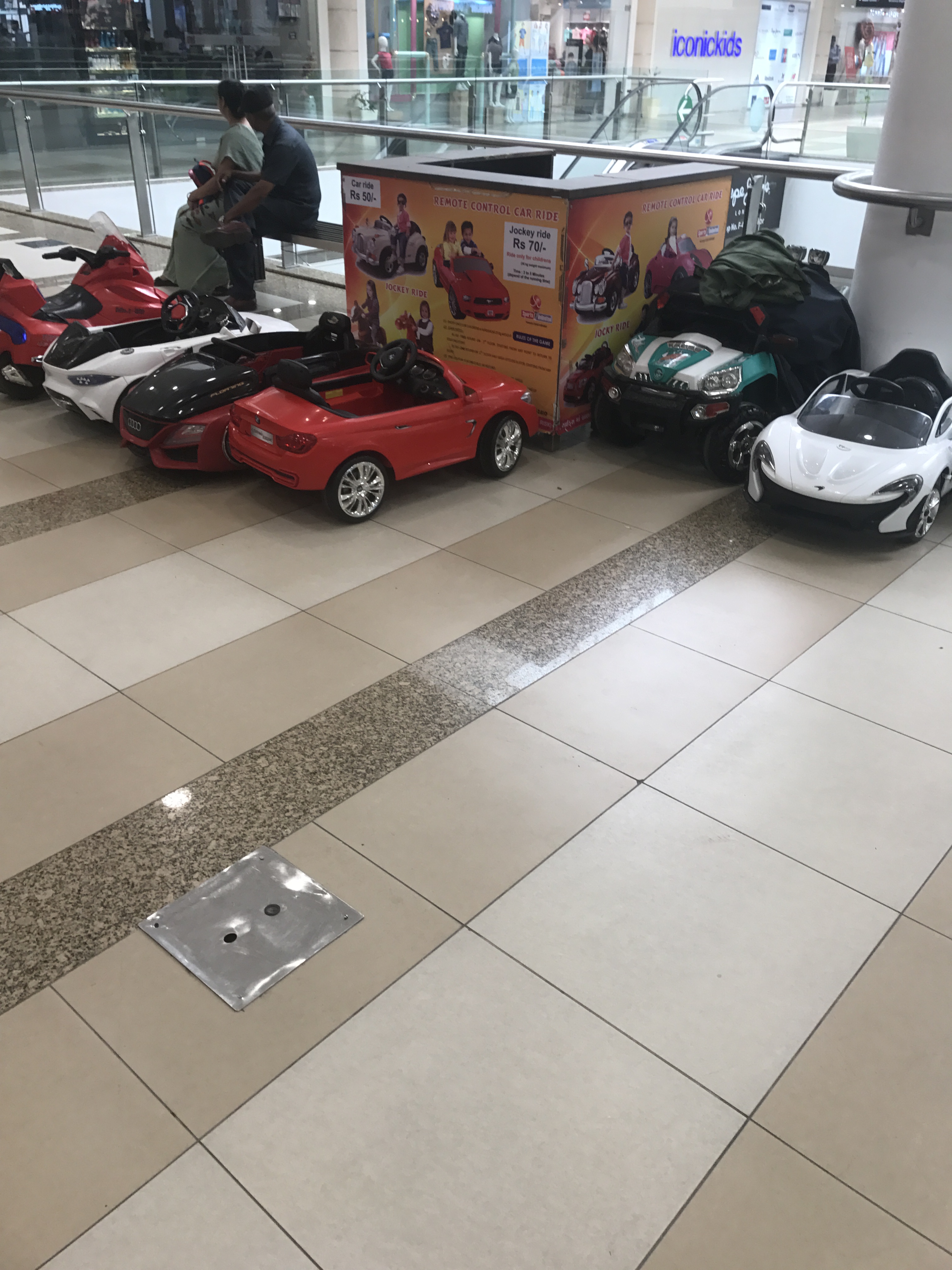 I would have loved this for my kids when they were younger.

And, related to that guard at the top of escalators. From what I have seen, escalators are motion detected. If no one is around, they are stopped – in keeping with precious commodities.

The other mall I visited was CG Central Mall, not far from where I am staying. No different that multi-level malls in the US that have just one anchor, this mall may have seen better days as the first level was probably 60% full, dropping by 10-15% per floor as I went up.

So, while there appeared to be a successful mall launch in 2009 while we were deep in a recession in the US, it appears that, from my sample of two, C malls are suffering the same fate in India as our C Malls are suffering in the US.

I hope to be back to the normal lease administration blog next week.